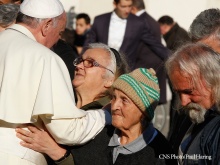 “Dung of the devil.” This is what Pope Francis calls a situation where “An unfettered pursuit of money rules”, where “The service of the common good is left behind.”  He says, “once greed for money presides over the entire socioeconomic system, it ruins society.”

These words are from the Holy Father’s address to the World Meeting of Popular Movements in Bolivia this month  (download the full text here).  Called by some “a little encyclical”, the Pope is taking up the role of the prophet Amos in this Sunday’s first readings, daring to speak truth to power, speaking up for the voiceless, and daring to criticize the sacred cows of communism and unbridled capitalism.  Amos was banished from the king’s city, and a similar response awaits Pope Francis from the halls of (monetary) power.

Who else is daring to speak the truth as Pope Francis does in these words to the assembled crowds of the faithful:  “In your letters and in our meetings, you have mentioned the many forms of exclusion and injustice which you experience in the workplace, in neighborhoods and throughout the land. They are many and diverse, just as many and diverse are the ways in which you confront them. Yet there is an invisible thread joining every one of the forms of exclusion. These are not isolated issues. Can we recognize that invisible thread which links them? I wonder whether we can see that those destructive realities are part of a system which has become global. Do we realize that that system has imposed the mentality of profit at any price, with no concern for social exclusion or the destruction of nature?”

Maybe this is the culture war we should be fighting.